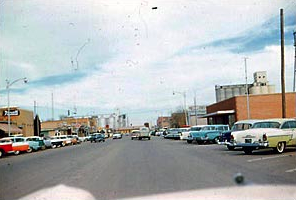 The town of Muleshoe, Texas, was incorporated in 1926. It had been founded just 13 years earlier, when the Pecos and Northern Texas Railway laid tracks across the agrarian expanse of Bailey County. Named after the nearby Muleshoe ranch (founded in 1877 by Civil War veteran Henry Black), the town became the county seat and quickly entered a period of expansion. By 1930, it had grown to nearly 800 residents. It topped 1,300 just ten years later. By 1960, Muleshoe had tripled in size to a population of 3,871. When the town reached more than 5,000 people in 1970, it boasted 200 businesses, two hospitals, two banks, a library, a newspaper and a radio station. (More Photos)

Today, Muleshoe is the agricultural and shipping center of the county, with farm supply manufacturing and food and feed processing plants playing major roles in the local economy. Muleshoe is also located at the heart of a thriving dairy industry. A community center was built in 1969 and is home to the area’s largest junior livestock show in February and also serves as the host of the World Championship Muleshoe Pitching Contest every July 4th . Twenty miles south of town on Highway 214 is the Muleshoe National Wildlife Refuge. Established in 1935, the Refuge is wintering grounds for sandhill cranes and refuge is the oldest in Texas.

Henry Black began using the Muleshoe brand in Fannin County in 1856 and registered it on November 12, 1860. He then went to fight for the Confederate Army, leaving behind his wife and two daughters. He returned after the Civil War to find that his home had burned and his wife had died; his children, however, were still alive. On August 17, 1865, he married Sarah Adalia Braley, and subsequently he began fording herds across the Red River and selling clothing his wife made. Mostly they were paid in cattle and horses. By 1877 their herd had outgrown their property, so the family moved to Stephens County, taking with them 1,000 cattle and 500 horses. Black purchased land—which already had three houses on it—and established the Muleshoe Ranch. He also dug a well and built a large ranchhouse and a log schoolhouse. The children built a rock fence around the cemetery where their grandmother was buried in 1883; some of this fence still stood in 1978. Gradually Black purchased more land, and by the time of his death in 1906, the Muleshoe Ranch covered 10,000 acres. Black also owned another 20,000 acres, much of which was rented to tenant farmers (see FARM TENANCY). After his death the land was divided among his wife and children, and the Muleshoe Ranch was the inheritance for his sons William and Jack, who had been involved with its operations. They established on the ranch the first dipping vat in the county. William continued to buy land around the ranch; he raised cattle, horses, cotton, and grain. From 1940 to 1965 William's daughter Sybil and her husband, B. H. Trammell, operated William's portion of the Muleshoe Ranch. On July 20, 1944, the original brand was officially transferred to their daughter, Patricia (Trammell) Swanson. In 1978 the Muleshoe Ranch covered some 6,000 acres and was known as the Trammell-Swanson Muleshoe Ranch. At that time the water well dug in 1877 was still extant, and a barn built around the same time was still in use.